“Fair Housing Month is a time to recommit to our nation’s obligation to ensure that everyone has equal access to safe, affordable housing,” said HUD Secretary Marcia L. Fudge. “Unfortunately, housing discrimination still exists, from individuals and families being denied a place to call home because of the color of their skin or where they come from, to landlords refusing to allow persons with disabilities to keep assistance animals, to individuals being denied a place to live because of who they love. In this moment of unprecedented crisis, fair housing is more important than ever. 53 years after the Fair Housing Act was signed, our journey to justice in housing continues.”

In addition to highlighting HUD’s enforcement activities, a central focus of this year’s commemoration with the Biden-Harris Administration’s pledge to end housing discrimination, provide redress to those who have experienced housing discrimination, to eliminate racial bias and other forms of discrimination in all stages of home-buying and renting, and to secure equal access to housing opportunity for all.

Last year, HUD and its Fair Housing Assistance Program partner agencies received more than 7,700 complaints alleging discrimination based on one or more of the Fair Housing Act’s seven protected classes: race, color, national origin, religion, sex, family status, and disability. During that period, the categories with the highest number of complaints were disability and race, respectively. HUD also received complaints that alleged lending discrimination as well as numerous complaints from women who faced unfair treatment, including sexual harassment.

“Although the Fair Housing Act became law in 1968, we still have major challenges ahead of us,” said Jeanine Worden, HUD’s Acting Assistant Secretary for Fair Housing and Equal Opportunity. “This April, on the 53rd anniversary of the Fair Housing Act, HUD is renewing its commitment to level the playing field so every person has the same opportunity to live where they choose and benefit from all of the opportunities this nation offers.”

For a complete listing of HUD Fair Housing Month events and activities, go to: www.hud.gov/FHM2021.

People who believe they have experienced discrimination may file a complaint by contacting HUD’s Office of Fair Housing and Equal Opportunity at (800) 669-9777 (voice) or (800) 877-8339 (Relay). Housing discrimination complaints may also be filed by going to hud.gov/fair housing.

The RCHA office will be closed on Friday, April 2, 2021.  We will return to normal working hours on Monday, April 5th.

Thank you for your understanding!

The federal eviction moratorium was extended through June 30, 2021.  See this order for details.

Did you know that your Amazon purchases can support a charitable organization? RCHA has set up an Amazon Smile account to benefit our

Youthbuild program. Just click on the link below and go through the steps to choose your charity. Choose “Highland Community Builders” as the charitable organization (they are the non-profit that our YouthBuild Endowment contributions go to.) Once you have your charity all set up, .5% of all of your purchases will go to the YouthBuild Endowment Fund as long as you purchase through your Amazon Smile account. Thanks for helping us help youth in our community!!! https://smile.amazon.com/.

RCHA has 3 vehicles available for auction

**If you are interested in bidding or have already bid, please note that we are not aware of the running condition of the trucks and they will be sold AS-IS. It is up to the bidder to determine if the condition of the vehicle meets their needs. You can view the vehicles at 312 Kennedy Street in Elkins (YouthBuild parking lot) and keys will be available upon request on site Thursday between 7:00 and 3:00 only. If you have already submitted a bid, we will accept revised bids or a request to withdraw bids up until the auction deadline of March 26th at 4:00 pm. Thank you. 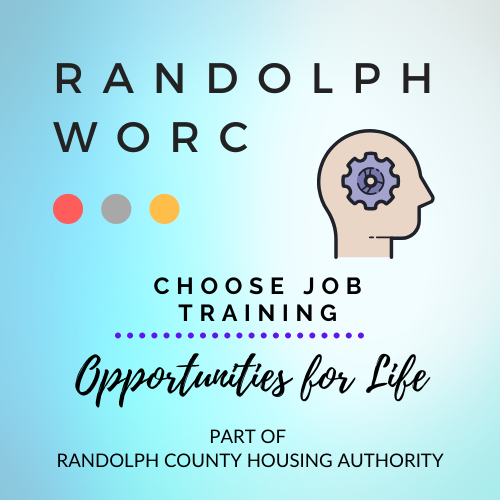 The Randolph County Housing Authority is happy to announce a partnership with Highland Community Builders to launch a Financial Opportunity Center, or FOC. The mission of the FOC is to help our clients reach their financial goals. We offer financial counseling to improve credit ratings, teach our clients savings techniques, and work to complete budgets to help you better manage your money. We can also offer employment coaching and income supports, where we help you navigate the workforce, meet with potential employers, and access additional resources and social services to help you with immediate funding. We believe that you would be a great candidate for the FOC based on your plans and goals that you have shared with us. If you would be interested in learning more about what this program can do for you, please feel free to respond to this email or call me at 304-940-3966.

Check out this interview by Next Century Cities with our own Jennifer Griggs, Connecting “Hill” Communities in Randolph County West Virginia.

If you missed our Facebook Live, here is a video of our virtual ribbon cutting this morning.

Join us as we host a Virtual Ribbon Cutting of our Learning Center in Downtown Elkins. Learn More about the classes to be held at our Center.

The Emerging Leaders Initiative is an executive-level series intended to accelerate the growth of high-potential small businesses in America’s underserved cities.  Developed by the SBA and drawing on the experiences of advisors and business leaders in urban communities across the country, this comprehensive curriculum provides the tools to assist business owners with catapulting their company to the next level and to help them to emerge as a force in their community.

The Emerging Leaders Virtual Program equips key decision makers with knowledge, tools, and networking connections to help to advance their business. Participants will leave with a better understanding of their business capacity through an individualized three-year growth plan.

Do I qualify to participate?

How do I apply?

If interested, participants should complete the online application by the deadline of Thursday, February 25, 2021 at  https://www.interise.org/sbaemergingleaders and select Fairmont, WV under the Program Location pull-down menu.

Businesses interested in SBA’s Emerging Leaders Program are invited to learn more by contacting Melissa Loder, program manager, at [email protected] or at (304) 623-7448.

Check out the latest news and services from our Healthy Home department in the FEBRUARY 2021 Newsletter.

The waiting list for the Section 8 Housing Choice Voucher program for rental assistance will open on Monday, February 8, 2021 at 9:00 a.m.  Procedures have changed due to COVID19.  There will be no walk-in applications taken.   Here is how you get started:

Applications must be returned to our office drop box at 2280 Randolph Avenue Elkins, WV or by mail, received by the due date on the application.

Our own Executive Director, Karen Jacobson was interviewed as well as some of our funders for this NYT article.  Click on this link to read the entire article.

Check out this article recently published about the YouthBuild-Loren Fortney Memorial Fund.

See this article on the Biden Administration Announcement on Foreclosure Moratorium and Mortgage Forbearance Deadline Extension That Will Bring Relief to Rural Residents.

Please click on the flyer below to learn more about our relief program.

Story on the recent vote regarding application for a CDBG/COVID-19 Grant.  https://www.theintermountain.com/news/local-news/2020/10/county-seeking-covid-19-funds/

If you missed our public hearing on Wednesday, 10/28 you can watch the video here to learn about RCHA’ s upcoming fund application.

Randolph County Housing Authority (RCHA) is applying to become a Move-to-Work (MTW) agency through the Department of Housing and Urban Development (HUD).  There will be a public hearing on Wednesday, November 4, 2020 at 2:00 p.m. at the Randolph County Housing Authority to discuss the application.  The Housing Authority is located at 2280 Randolph Avenue, Elkins, WV.  RCHA administers housing assistance in Barbour, Lewis, Pendleton, Randolph, Tucker and Upshur Counties. Social distancing will be observed; a mask will be required to enter the building.

If you missed our public hearing on Friday, 10/23 you can watch the video here to learn about RCHA’ s upcoming fund application.

Check out this recent newsletter sharing updates about what has been going on at YouthBuild!

The Randolph County Housing Authority and the Randolph County Commissions have scheduled a public hearing and public comment period concerning a proposed application to the West Virginia Development Office for CDBG-CV1 funds.  Zoom registration information is below.

You are invited to a Zoom meeting.

Register in advance for this meeting:

After registering, you will receive a confirmation email containing information about joining the meeting.

Our First Get Ready! Wood Manufacturing Technician Training Course class received their certifications this past week.  We were excited to have AHF Products on site to conduct interviews with the participants on their last day of class.

These participants will continue to receive job coaching and support through our WORC program.

Do you want to enroll in our next class?  Contact Us today at [email protected]

Special Shout Out to Mike M for being an awesome instructor.

RCHA is looking for a part-time person to help oversee and tutor children doing virtual learning.  Please see this RFP for Childcare tutor for details.

PUBLIC HEARING:  A Public Hearing will be held Friday, October 23rd at 10:00am by Zoom.

The Randolph County Housing Authority (RCHA) and the Randolph County Commission (RCC) have scheduled a public hearing and public comment period concerning a proposed application to the West Virginia Development Office (WVDO) for CDBG-CV1 funds.   These funds were authorized by the Coronavirus Aid, Relief, and Economic Security Act (CARES Act), Public Law 116-136, which was signed on March 27, 2020.  A Notice of Program Rules, Waivers, and Alternative Requirements under the CARES Act for Community Development Block Grant (CDBG) Program Coronavirus Response Grants, Fiscal Year 2019 and 2020 CDBG and Other Formula Programs was published on August 7, 2020.  Additionally, the State of West Virginia amended its FY 2019 Annual Action Plan and it is available at https://wvcad.org/resources.

DESCRIPTION OF CDBG-CV1: The WVDO is accepting applications to help in the prevention of, preparation for, and response to the Coronavirus in non-Entitlement communities throughout the state.  Funding is available for applicants in the categories of public facilities, public services and planning.  The application being prepared by RCHA and RCC is in the Public Service category.  In addition to meeting the Low- to Moderate-Income Benefit National Objective, each project must be an approved eligible CDBG-CV1 Activity, which includes:

REVIEW: A comment period will begin on Thursday, October 22, 2020 and will continue until the close of business on Tuesday, October 26th.

RCHA conducts business in accordance with the Fair Housing Act (The Civil Rights Act of 1968, as amended by the Fair Housing Amendments Act of 1988) with equal access to all persons regardless of race, color, national origin, religion, sex, familial status, and disability.

RCHA is proud to be partnering with several area agencies to launch the Financial Opportunity Center and the Digital Navigator Program.  Read more about the launch here.